No one can dispute the fact that Messi has had a rather slow debut  in his virgin season with his new club, it won't be wrong to say that things haven't gone according to plan especially for Messi fans who have been use to seeing the former Barca talisman scoring goals week in and week out .Despite scoring 3 goals in 3 UEFA champions league matches, many have been wondering when he was gonna score his first league goal with the French giant. Messi had registered 0 assists and no goals in his first five appearances for his new club Paris Saint Germaine .

Critics did not take too long to question the six times ballon d'or and six times European golden boot winner's status as the goat , some went on to say that Barca was his comfort zone and there's no way he can excel out of Barca . Cristiano's fans have really had a good laugh about Messi's league form especially because Cristiano has had an amazing start to this year's campaign following his return to Old Traford even though the situation of Man U is now a critical one as they had to fire their manager , well , that will be a topic for another day .

ARGENTINA'S QUALIFICATION FOR THE WORLD CUP BROUGHT A BREATH OF FRESH AIR...

Messi said the following on his Instagram page after the Albicelestes qualified for the Qatar 2022 World Cup ..." I have just landed in Paris with the immense joy of having achieved the goal of passing to the World Cup in Qatar . It's definitely the strawberry of dessert in a very special year we live with .......he thanked the fans and went on to say that there is only one and a half months left until 2022 and he would like to finish the year in the best possible way and with more good memories that can be achieved in France" . 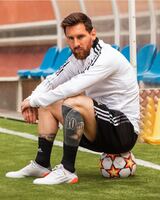 Messi struggled with fitness issues following his arrival at the parc de prince which kept him out for two games after he penned his signature with the Qatari state owned club , he however made his debut in his new colors on the 29th of August 2021 against Reims , Messi played only 24 minutes in that game , PSG won the game 2:0 but it was very strange for Barca and Messi faithfuls to see Messi in a new shirt .

MESSI HAS NOW SCORED 4 GOALS IN 9 APPEARANCES SINCE HE MOVED TO PARIS SAINT GERMAINE .

Messi fans were beginning to wonder if Messi was not gonna register any goal in the first half of the season . Messi finally scored his first league goal with PSG on the 20th of November 2021 against Nantes , his goal came at the 87th minute of play as the little magician curled a fine shot from the outside of the penalty box, the game ended 3:1 in favor of the league leaders . PSG had to finish the game with a man down after their Keeper Keylor Navas was shown a red card at the 65th minute .

Can we say that Messi has used his first five league matches to study the French league 1, are we gonna see the version of Messi that we all are use to hence forth ? , time will probably tell .

DO YOU WANT TO KNOW HOW MANY GOALS CRISTIANO SCORED WHILE PLAYING FOR REAL MADRID?